"Remembering the past gives power to the present..." 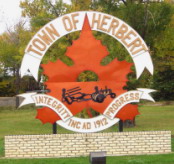 The Town of Herbert was named after Sir Michael Henry Herbert, an English Diplomat who became the British Ambassador to the United States. In 1903 the Canadian Government opened much of its land in the area for settlement. It was advertised as "The World's Choicest Wheat Lands". Many settlers did not really know exactly what they were coming to. They did not realize how barren and treeless the prairies were, how windy this flat country could be summer and winter, how very cold and sometimes dangerous a prairie winter could be, or how hot the summers usually were.

Because everyone in the community came from somewhere else, the town was like a patchwork of many nationalities and religious backgrounds. This diversity bred a feeling of closeness that still exists in Herbert's history. Though much has changed in Herbert's history, a great deal remains the same. The prairies still seem to stretch on forever; and as long as they do, Herbert will remember its heritage and friendly way of treating people.

Herbert was incorporated as a Town in 1912. The population has varied over the years from as high as about 1400 to less than 800. Current population is around 800. There has been recent growth due to the current influx of people moving from B.C. and other locations. Our quiet, friendly community with clean air and water offers superb health, education, recreation and spiritual services to residents. Dedicated town staff provides civic services that are second to none.

Close proximity to larger centers and our location on the Trans-Canada Highway make it convenient to travel for needs not provided in our town.

Herbert’s many businesses and services welcome area residents and visitors alike to stop in, take in the local attractions and shop in our local establishments. Pick up on the flavor of small town Saskatchewan. Come back soon and often.

The sign depicts the official Town Seal which is also replicated in a town lapel pin. Constructed by Ideal ‘N’ Ironworks and painted by Herbert Auto Collision, it was erected at the entrance to the Town in the summer of 2000.  For Saskatchewan’s Centennial in 2005, Bernie Andres designed and installed the brickwork.

"The beautiful gently rolling section of the Canadian prairie, which was to contain the townsite of Herbert was part of the great buffalo grazing grounds of southwest Saskatchewan. Herbert is toward the eastern edge of the Great Plains of North America - the treeless, rolling region known as the Albert Plain. The South Saskatchewan River and the Swift Current Creek were the nearest rivers. They, and the other bodies of water found in the area, are the result of glaciation.".

"The year 1987 is a significant one for Herbert. Seventy-five years ago Herbert was a fast growing village, the centre of a rich wheat growing area with the Herbert Mill to attract farmers from miles around....Now 75 years later we are preparing to celebrate the diamond jubilee of that event." (From The Herbert History to 1987 - Bittersweet Years).