Burial grounds are an essential part of a community; the Herbert Cemetery is legally described as: NorthWest quarter of Section 7 Township 17 Range 9 West of the Third Meridian, Plan N3748 was surveyed December 1912 by Albert Coleman Garner, Regina, Sask. Duplicate Certificates of Titles 122DZ, 123DZ and 124DZ were registered in the Moose Jaw Land Registration District. "Potter's Field" was designated in the northwest portion of the plan, and entries were made on separate pages in the register.

Apparently there was an epidemic of influenza in 1918, and adequate records were not kept, so many names are not recorded. Through the years, the initial entry was made by a family member, and future additions were not recorded. As burial occurred, the family members would mark the site at the location but it would not be recorded in the town records.

Planning for the 'new' cemetery began in 1958, surveyed by Underwood McLellan & Associates (Moose Jaw) Ltd; these plans were completed in June 1960. Prices charged were $15.00 per single plot. {The latest increase, in January 1991, is $100.00 per single plot.} The Herbert Community Auxiliary, in 1963, made plans to landscape the grounds. In 1964, gates for the cemetery, hung on red brick posts, were installed. This was an ambious group, and they contacted many people for assistance in marking and locating graves, as well as for financial support. The gates are a reminder of their efforts and consideration.

By early 1970, Town Administrator Edna Voth realized the need for recording the existing information on a map. She, with help from John J. Kehler, the member of council in charge of the cemetery, and who did a great deal of footwork, spent many hours putting together the foundation I have used to build on.

In 1988 and 1989, Merle Harrison, as assistant administrator, with a survey crew of Murray Harrison and Ernest Zander, surveyed the total cemetery to update for posterity, the unmarked sites and the actual burial sites, which differs in many instances from the register. All the information was documented and the map was put in book form for easy access.

It is interesting to note that when someone in a school district died, the plots chosen were in proximity to persons deceased that had lived in the same area. Family plots were selected with care, a practice that is still very evident today. Markers are also chosen with care, an indication of the feeling for the person interred therein, with references to their life by symbols that exemplify their faith, or their work, for example, may be stems of wheat or tools; their interests symbolized by designs of flowers or musical notes, each one being very unique. These broad selections and styles of headstones give a distinct 'personality' and for anyone who goes there, it is like a stroll through memory lane and one remembers with warmth those memories evoked.

Not for those with small town ties are the beautiful grassed cemeteries with bronze plaques...a visit there is specifically to remember their own loved ones. But the little prairie cemetery, dotted with small bushes, little fences and crosses, perennial plants, flower vases and personal touches really do tell a story of those who have gone before. Another most selective choice are the inscriptions...one such inscription in the Herbert Cemetery that sums up great feeling for the departed: a final eloquent tribute "To Memory Ever Dear"

There is also the Roman Catholic Cemetery located just north of town on Shaw street.

There is a Cenotaph located in the park downtown that honours those who lost their lives fighting in World War I, World II, the Korean War and Afghanistan War.

The Cemetery Committee, in conjunction with the 2012 celebration, has had a huge map of the cemetery put up in the gazebo in the cemetery and three binders with all the information concerning the whereabouts of anyone interred in the cemetery. We hope that this will assist anyone looking for their loved ones. Phase One is the very oldest section of the cemetery, Phase Two is the second section and Phase Three is the brand new section just opened in 2012. 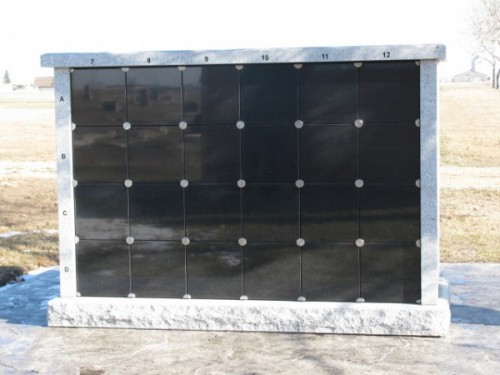 The Town of Herbert would like to remind anyone interested that we have a columbarium in place at the Herbert Cemetery. This is an alternative for those not wanting a burial plot. This monument houses 48 niches - 24 per side, facing east & west; for loved ones cremains. Each niche may house a maximum of two urns. The dimensions of each niche are a standard      sizing of 12" x 12" x 14". The cost of a niche does not include the engraving of the granite plaque. The town acquired the columbarium through Swift Current Monumental Co. Ltd., which will be the monument company we would refer you to for engraving; however, it is the family's choice. We do have some restrictions on the engraving as we would like to maintain an overall uniform look.

Stop by the cemetery to view the columbarium. Further inquiries can be directed to the town  office.

The Town of Herbert is not regulating this for our cemetery, but rather encouraging families of deceased persons to utilize a burial vault.  A Burial Vault is an outside receptacle, or container, in which the casket and remains are placed at the time of burial.  This helps to maintain the above ground aesthetics of the grave site and prevent the earth from settling over time.

Further inquiries can be directed to your Funeral Provider, should this be a consideration.

We highly recommend this practice, but ultimately the decision is for the bereft families to determine what is in their best interests.